After barely starting the second Epic Willys Adventure we began to have issues with our 1960 FC-150 on what was going to be a cross country trip from the northern U.S. Border to the southern. On the first couple of days the little cab-over ran great and we were clipping along at cruising speeds that even shocked us as we traveled through Glacier National Park in northern Montana. As we made our way up and over the steep grade on the famed, “Road to the Sun” we continued to be amazed at how well the FC was performing at high altitude and under the demands of such a steep grade while being fully loaded with gear.

On day one we made our way from Kalispell Montana into Canada and then back into the U.S. where we set up camp for the evening. On the morning of the second day half of the group began to retrace our way back over the same mountain range while the other half stayed behind to address some of the mechanical issues from the previous day. Day two started off great for us until we were cresting the highest point of the pass and within a mile or so of the comfort of knowing we would be letting gravity get us down the mountain, the first of our fuel issues began.

Out of nowhere and by complete surprise, our little FC began to buck and kick like a wild stallion before abruptly dying in the middle of the road in what couldn’t have been a more inconvenient spot during the peak of tourist season. Initially we wondered if the fuel filter might be plugged or possibly a fuel pump going bad so we pushed it to the side of the road and let it sit for a minute to cool down. After sitting for a few and with a turn of the key, it fired right back up and ran fine for a short distance before acting up again. We were able to keep the momentum going long enough to allow us to crest the peak of the mountain and eventually, down the other side.

By the end of the day both groups had reconnected, made it either up and over, or around the mountain in back into Kalispell where the trip had kicked off the previous day. The group collected at a local O’reilly Auto Parts store where we decided to pull the Carter YF carburetor off in an attempt to clean it and see if there was anything obvious causing the issues we were fighting. Since one of the guys in the group had a fair amount of experience with the YF we recruited his help in hopes that our problem would be quickly solved so we pulled it off and went through it finding noting other than some dirt.

Since it was early evening we headed off to a camp site in hopes of getting some rest and covering some miles the following day to make up for what was lost previously. The next day was nothing more than a repeat of what we had been dealing with before but we didn’t want to give up so we spent the morning trying anything else we could think of. After pulling the recently installed fuel filter and finding it was more blocked than we thought it should be, we once again had renewed hopes and headed out to brave the day with a new fuel filter and a somewhat, freshly rebuilt carburetor.

Day three was a success to an extent but not one that was perfect, things seemed to be looking up during the morning but as the day progressed, the issues came back and progressively worsened. When we were on level ground or going slightly downhill, we could hit speeds around the mid 50’s but as soon as we hit any kind of climb or load, the FC would fall on its face leaving us to struggle against the slightest climb. Unfortunately over the next two days things eventually got bad enough that we had to make the tough decision to let the group head on without us in hope of diagnosing things further, find a fix and possibly catch up with them the next day.

As things worked out, the little town where we said our goodbyes to the group would not have a single parts store or a place to get a room. We ended up having to call a tow truck which was able to take us to the nearest town, Missoula for the night. With a growing suspicion that the carburetor was the source of our problems we called the local parts stores to see if they had a rebuild kit for the Carter YF or a replacement on hand. Sadly we were informed that neither option was available and the reality of continuing the trip was unlikely so we made plans to get ourselves and our FC-150 back home where we had the tools, time and resources to further diagnose the issues and fix it so at the very least, we could get back to driving and enjoying our little cab over Jeep.

Once home we considered a couple common options of either rebuilding the original Carter YF or purchasing a new YF or we could try a new Solex carburetor.

In the past I had heard mixed reviews about the Solex carburetors, some good and some bad but ultimately, I had never tried nor owned a vehicle with one so I thought for the price difference of a new YF, it might be worth giving one a try. As in the past, one of our first resources for replacement parts for old iron like the Willys platforms is Omix-ADA, we contacted them and picked up a new Solex carburetor to if it would make any noticeable difference.

Upon receiving the new Solex we wanted to compare it to the old YF to ensure the fuel port and linkage would line up. By all appearances it looked like it would work fine and should be an easy swap to do.

We began the process by taking the engine cover inside the cab off and then removed the clamp holding the air filter horn to the carburetor. Next we unhooked the fuel line and removed the fitting so it could be utilized in the new Solex, then we unhooked the throttle linkage as well as the choke cable. Lastly, the two nuts holding the base plate of the carburetor were removed and the old carburetor and gasket were ready to be pulled off and it was really as simple as that. 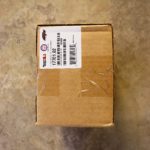 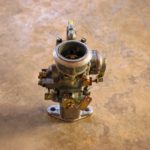 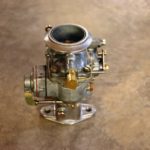 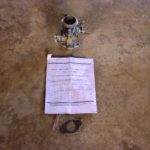 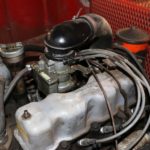 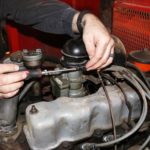 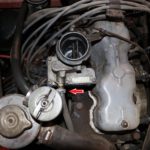 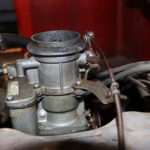 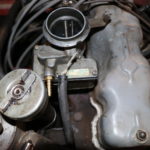 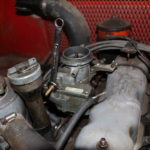 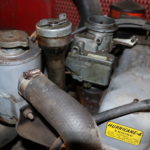 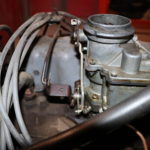 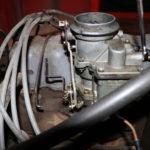 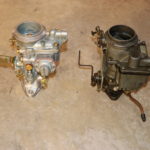 With the original Carter YF removed we cleaned the top of the intake manifold off where the Solex would be mounted, carefully ensuring we didn’t allow any debris to fall into the intake itself. Once the mounting surface was clean, we placed the carburetor gasket over the mounting studs and then set the new Solex in place and gently and evenly tightened the two mounting nuts and lock washers down to secure the carburetor in place. We also installed the fuel fitting and then connected the rubber fuel supply line. 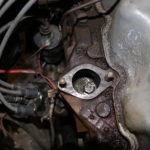 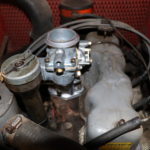 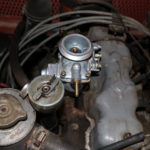 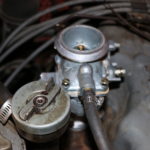 Next the throttle linkage was connected and held in place with the securing cotter pins, all components lined up identical to the original Carter YF. With the linkage secured, a new choke cable was installed since the old one was sticky and certainly deserving of being retired. 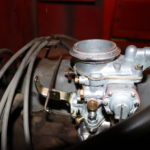 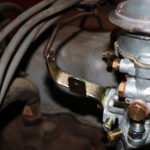 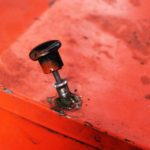 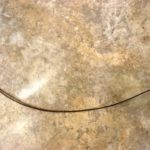 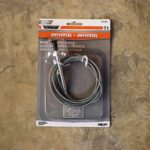 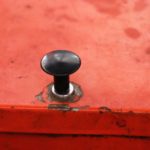 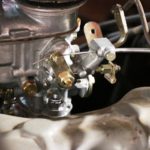 With the new Solex carburetor completely installed and hooked up it was time for the moment of truth, time to see if we would notice any difference in the way the Jeep would run at idle just from installing a new carburetor right out of the box. We gave the electric pump a few seconds to prime the system, followed that with a couple pumps of the gas pedal, a quick turn of the key and the FC jumped right to life.  It was immediately obvious that there was a huge improvement from what it ran like prior to the swap, no sputtering, and no stink from the unburned fuel plus, there was a noticeable difference in throttle response at idle.

There are a couple of unrelated things still needing to be addressed. We’ll get to those before we road test it but as it sits now, we’re happy to report that the Solex Carburetor sourced from Omix-ADA was a worthy swap. Once we get a chance to road test it and make any necessary adjustments, we’ll report back with an update and our final review.